Macs are becoming increasingly popular in medical facilities across the world in 2017 and so we’ve looked at the best EMR for Mac and the best medical billing software for Mac users. More and more medical professionals from doctors to nurses are using Apple devices such as iPads, MacBooks and iMacs although most EMR (Electronic Medical Record), EHR (Electronic Health Record) and medical billing software for Mac users is still web-based. In fact the 2009 US HITECH Act means that medical institutions will be penalized if they don’t make demonstrable efforts to migrate patient data to digital records. Digitizing patient records also has other advantages such as increasing the time spent on patient care, cutting down on paperwork, improving efficiency and increasing the profitability of your practice. So here we take a closer look at the best EMR/EHR and medical billing software for Mac users.

EMR Software For Mac: Before You Buy

The main problem Mac users find is that there simply isn’t much EMR or medical billing software designed specifically for Mac. In fact, the only EHR software designed specifically for Mac with a Mac desktop app is MacPractice EHR. You will see a lot of sites or EMR applications that claim to “support Macs” or are “Mac native” but the truth is they are web apps that simply work in a browser on your Mac. Some claim that they are “Apple compatible” but this only means that they also have an iPad app that you can download – it does not include an app for OS X. That’s fine if you’re happy with running a cloud software on your Mac but don’t be fooled into thinking that they actually have a Mac desktop app.

If you are comfortable with using an online solution, the good news is that there are several very good well established web-based EMR/EHR and medical billing applications (also known as SaaS – Software as a Solution) services but there are also advantages and disadvantages of using them on Mac.

Some medical software solutions are focused on a specific type of medical care such as cardiology, mental health, optometry or physiotherapy. Others are more general and are suitable for a wide range of medical institutions. For example, MacPractice EHR is designed for medical practices in general but they also make specific Dental, Chiro and Optical EMR software so make sure the EHR software you choose caters for your business needs if you have specific requirements.

If you intend to use iOS devices such as iPhones or iPads alongside your Mac, then it’s important that the medical software you choose either has a mobile version or a mobile app. If you choose an online medical software that doesn’t for example, you’ll end up having to access the desktop web version on mobile and that simply won’t be practical. The good news is that there are several medical software solutions that feature native iOS apps for iPhone and iPad. These are usually focused on the iPad which conveniently turn it into a clipboard for medical practitioners and patients to quickly and efficiently enter data. Some of the most notable EHR and medical billing software for Mac that also have iOS apps include HealthFusion MediTouch, drchrono EHR and MacPractice EHR.

With these things in mind then, here are the best EMR and medical billing software for Mac users.

MacPractice EHR is the only dedicated EMR/EHR software designed exclusively for Mac users and Apple devices. MacPractice has been established since 1984 and works on Mac, iPad and iPhone with around 2000 medical practices and 15,000 providers currently using it. It’s an all-in-one solution that supports everything you need in an EMR software including patient appointment check-ins and reports, patient registration, patient iEHR forms, reports, inventory, prescriptions and ePrescriptions. MacPractice allows you to chart, order, e-prescribe, review and submit charges quickly in a logical, well designed interface. The MacPractice iEHR app for iPad has exactly the same layout to prevent confusion when switching between the two and also features a handy clipboard view that patients can use to fill in questions about their health. This is a nice touch as it avoids any data entry later by medical practitioners and allows customers to fill in forms at their own pace. MacPractice will help you migrate customer data from other systems and also offers training solutions for your staff including on-site training and telephone support. MacPractice is purely a desktop solution so all of your data is saved either on your Mac or iOS device and synced between the two. There’s nothing stored off site on external servers that could be compromised. MacPractice provides ICD-10 coding and billing features to help itemize customer care and treatments for billing and record purposes. You can add codes manually and MacPractice is updated with new codes regularly. You can see how this works in the video below:

When it comes to the actual billing of patients though, you need to purchase MacPractice Billing Services. This is effectively outsourcing your medical billing to another company although it obviously makes sense to outsource to a company that’s closely connected to the medical software you’re using on a daily basis. You can pay for MacPractice Billing Services on a long-term, short-term, or even hourly basis but you’ll need to request a quote first.

If you’re looking for something designed specifically for Mac, MacPractice is easily the market leader with a solid track record and product. There are even MacPractice apps for specific medical practices such as MacPractice Dental Software, Chiro Software and Optical Software for Mac.

You can watch a good overview of MacPractice EHR below and sign-up for a free trial.

If you’re a small medical practice, a non-profit or simply on a very tight budget, then look no further than OpenEMR. OpenEMR is an impressive open source medical EMR that is ONC Complete Ambulatory HER Certified and includes health records, appointment scheduling, billing and free support from its community of users and developers. OpenEMR is very much a DIY electronic medical records system with a simple Wiki page to guide you through setup and features. OpenEMR even supports medical billing with support for codes and 5010 standards. However, if you want to integrate your own payment system, you can although you may need some help from the forum members in order to do so. OpenEMR is nowhere near as slick as MacPractice and it doesn’t work on iPhone or iPad so if you need a mobile solution, it’s definitely not an option. However, it’s a surprisingly stable and solid product for desktop Macs considering it doesn’t cost a cent. You can watch an overview of how to setup and use OpenEMR below:

drchrono EHR is a popular, well designed EHR/EMR all-in-one medical practice management, electronic health records and medical billing software. drchrono is extremely user-friendly and features some nice touches such as automated texting/emailing of clients, eRX and EPCS tools for order prescriptions and labs and convenient in-app billing. Although there’s no Mac desktop app, drchrono is very focused on Apple users, even featuring an Apple Watch app for upcoming appointments and messages. The web version looks and works very well on Mac too and doesn’t look like something that’s Windows inspired like a lot of EMR software.

drchrono EMR’s billing component is called Apollo and allows you to either do billing in-house. There’s also an Apollo Plus service which allows you to or contract out billing to drchrono. drchrono EHR doesn’t come cheap with pricing starting at $199 per month for small practices and going up to $499 for month or more for bigger practices. However, it’s definitely one of the most accomplished, professional and reliable EHR solutions out there. You can watch a good overview of how to get started with drchrono within 30 minutes below: 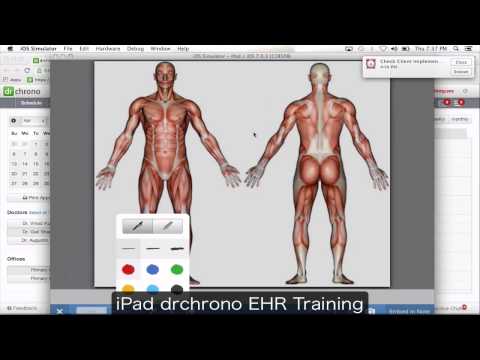 Although MediTouch EMR does not have a Mac desktop app, it caters very well for iPad owners with a strong emphasis on its iOS app. MediTouch is a fully integrated EHR and billing software. MediTouch for iPad allows you to easily perform charting o the go or perform a complete SOAP conveniently and quickly and even allows you to prescribe using your iPhone. The iPad app even supports dictation which is extremely useful for making notes. All MediTouch EMR software is ICD-10 ready meaning and setup with a Meaningful Use report code so that you can automatically apply for incentive payments if you are eligible. Patients have their own portal which they can use to request medication refills and track reports, results and other important data. Proving that patients have access to their own medical data is actually essential to comply with Meaningful Use Stage 2 in order to access HITEC subsidies.

Pricing plans for MediTouch are only available on request but you can also request a demo first. You can also watch an overview of MediTouch below: 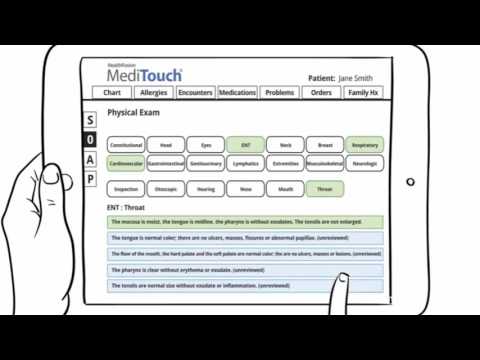 There are many other medical billing and EMR/EHR services out there but these are the most Mac/Apple centric ones we’ve seen. If you want something that’s dedicated to Mac, then MacPractice is really your only choice. However, if you don’t want to pay for a seperate billing system, then drchrono or MediTouch are excellent all-in solutions that don’t have Mac apps but have excellent iPad apps

We hope this article has helped you learn more about EMR software on Mac but if you have any questions or suggestions, let us know in the comments below.