Statistical applications don’t come cheap so we’ve hunted down the best free statistical software for Mac for those on a budget.

Most statistical software for Mac comes with a hefty price tag although there in recent times, there has been the emergence of more affordable, user-friendly software such as Wizard.

While we can’t promise the software featured here is as powerful as SPSS or JMP, there are some surprisingly good free statistical software for Mac for students and others on a budget that simply require some time learning how to use them.

Be aware that the main issue you’ll find with most free statistical software on Mac is lack of features and poor usability. Free statistical analysis software tends to be lacking in coherent user-friendly interfaces or instructions and simply doesn’t have the advanced analytical power of commercial software.

With this in mind, here then is our list of the top free statistical analysis software for Mac in order of ranking.

R Project is an amazingly powerful but free tool for statisticians and researchers which can do pretty much everything the commercial software Stata can do and more. However, compared to Wizard the learning curve of R is very steep indeed as you can see from the R Project manual. Since R Project is completely open source and developed for free by various contributors, there has been little effort to make it accessible to newcomers. You can however make things a bit easier by installing a Graphical User Interface (GUI) such as R Commander and there are various books on how to use R with R Commander to help you.

You’ll also find that you have to do things manually in R which are automated in commercial software such as Stata. These include things such as robust or bootstrap standard errors and generalized linear mixed models which have more features and are better implemented in Stata. The other thing to bear in mind is that you get what you pay for when it comes to statistical software. Stata may be expensive but you do get full support, clear documentation and automatic updates which you don’t get in R Project.

Stata is a far better option for day-to-day analyses but R does have more procedures, albeit it’s harder to use. If you’re a student however or on a budget, if you can invest the time, you get a lot out of R for free.

RStudio is similar to R Project in that it’s powerful and free but is more of a statistics and data manipulation tool than a GUI statistics tool. You can run RStudio either on your Mac desktop or via a server. Again, it’s also very complicated to learn but unlike R Project, it does have extensive RStudio webinars and tutorial videos to help learn how to use it.

RStudio is not for the faint-hearted but it’s extremely powerful and slick once you get used to it. You can see RStudio in action below: 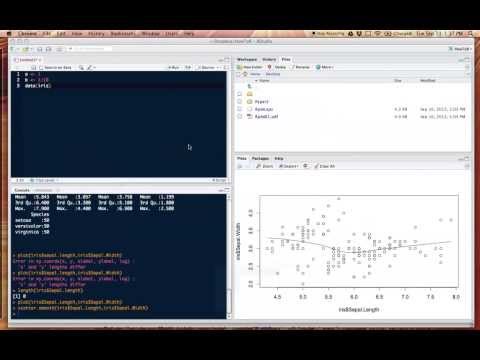 SAS doesn’t have a dedicated Mac client because it’ a virtual application and you need to install VirtualBox or VMWare Fusion first in order to use it. However, it’s definitely worth it as SAS University Edition is probably the slickest and most powerful free statistical software you’ll find on Mac. As the name suggest, SAS University Edition is only available for free to students and educators so if you’re enrolled or teaching at university, don’t look any further.

Apple Numbers is Apple’s answer to Excel but it has come a long way and nowadays is also a pretty powerful tool for statistical analysis. Apple Numbers is very easy to use compared to most other free statistical analysis software and uses interactive charts and graphs to help you interpret data. A bit like with Wizard for Mac, you can bring stats to life with animated charts which you can control by dragging a slider to highlight important changes in numbers. There’s also conditional highlighting which automatically formats cells when they meet specific numerical, text, date, and duration points which makes it easier to spot trends or issues. You can easily right-click any column or open the filter panel to filter data and Numbers will even drop hints as to how to filter your data. Apple Numbers of course is primarily a spreadsheet application rather than a statistical analysis software and it’s not practical for ANOVA formulas or performing hypothesis tests such as Tukey. But if your needs are quite simple and you also need an alternative to Excel on your Mac, Numbers does just fine. Note that Apple Numbers is free for El Capitan users and above or Macs purchased after October 1, 2013.

GNU Octave is an open source version of Matlab. GNU Octave is quite complex however as it is a high-level interpreted language for numerical computations. It can be used for the numerical solution of linear and nonlinear problems and solving other numerical experiments. GNU Octave is very dry but it does feature extensive graphics capabilities for data visualization and manipulation. The main problem for most users is that Octave is normally used through an interactive command line interface although it can be used to write non-interactive programs. You’ll really need a working knowledge of Matlab which is what GNU Octave is based on.

Root is a free modular scientific software framework designed to deal with big data processing, statistical analysis, visualisation and storage. You’ll need a grounding in programming C++ because Root is written mainly in C++ but is also integrated with other languages such as Python and R. You can download Root for Mac or even use Root directly in your browser too.

Mathematica is by Wofram Alpha and is used engineers, economists, scientists, mathematicians, and educators worldwide. Mathematica Student Edition covers many areas including numeric, symbolic, theoretical or experimental problems large or small. You don’t need to know syntax as it’s all based on free-form linguistic input which makes it easier than many other statistical software on Mac featured here. Mathematica Student Edition is ideal for exploring formulas, solving equations, and proving theorems. You can analyze mathematical functions and complex numbers or tackle linear and nonlinear optimization problems as well as solve integrals and differential equations. You can also analyze huge datasets with a wide range of statistics operations and probability distributions. Mathematica Student Edition is an industry standard too which is so widely used, it’s an essential tool for professional statisticians, educators and students.

MacAnova is an open source interactive statistical analysis software for both Windows and Macintosh. Despite the name, MacAnova is not just for doing analysis of Variance. It’s main strengths are analysis of variance and related models, matrix algebra and time series analysis. It can also be used for uni and multivariate exploratory statistics. MacAnova has a command line oriented interface but the software has been developed so that some functions can be accessed via a menus. Note that although the language and syntax are similar to S, MacAnova is not S or R.

G*Power is a small German statistical analysis software for Mac that can compute statistical power analyses for tests such as t tests, F tests, χ2 tests, z tests and some exact tests. You can also use G*Power to compute effect sizes and to graphically display results of power analyses.

PSPP is a free statistical anaylsis software for Mac for analysis of sampled data. PSPP is similar to a free version of SPSS which we covered in our in-depth look at the best statistical software for Mac. However, PSPP is aimed more at statisticians, social scientists and students that need quick analysis of sampled data. PSPP can perform various complex data transformation functions. For example, PSPP can handle recoding, weighting and handling of missing values, compute descriptive statistics, crosstabs and explore tables, T-tests, one-way ANOVA, factor analysis, Chronbach Alpha, ROC curve and some non-parametric tests.

Regress+ is quite a dated and simple free statistical analysis software for Mac including functions such as regression, stochastic modeling and bootstrapping.

SOFA (Statistics Open For All) is a surprisingly good open source statistical software for Mac and Windows. If the lack of user interface in much of the statistical software featured here intimidates you, SOFA may be a better choice. SOFA is a user-friendly statistics analysis and reporting program with a refreshing focus on ease of use and elegant graphical displays.

We hope this article shows that there’s plenty of software for statisticians on Mac without having to break the bank.

If you’ve got any questions, comments, experiences or suggestions with any of the apps featured here, let us know in the comments below.