There are already some excellent flight simulators for Mac but to take things to the next level of realism you need real flight controllers.

Note that the only flight simulator on Mac that’s compatible with external flight controls is X-Plane so you’ll need to have that first before getting any of these.

You may also want to check out our look at the best joysticks for X-Plane if you just want to add a joystick controller to your X-Plane setup.

Here then are the top 5 flight simulator hardware for cockpits to create a more realistic flying experience on your Mac. If you only buy one cockpit accessory, the Logitech G Saitek Pro Flight Yoke System is probably the best way to make your flight experience more realistic.

It allows you to control pitch trim, roll trim and flaps and the view out of the aircraft (front, side & rear).

The Saitek PRO Flight Yoke definitely makes flying planes in X-Plane more realistic although there are a few drawbacks. It only has 45 degrees of movement compared to the 90 degrees of a real yoke for example. To get the most out of it, you’ll also need the rudder pedals (see number 4 below) because otherwise X-Plane will automatically compensate for them. The LED works fully in real-time so that you don’t need to view the radio stack on your screen.

For instrument training and ATC training, the Logitech G Saitek Pro Flight Radio Panel provides a much better experience than tuning the radio in X-Plane with a mouse or Trackpad.

It is however quite power hungry on your Mac’s USB ports so we recommend either using a USB hub or making sure that your Mac is plugged into a power supply when using it. Read more about this in the “Before You Buy” section at the foot of these reviews.

The Logitech G Pro Flight Multi Panel is a set of switches and LED display to control various aspects of the flight deck. It removes the need to use many of the onscreen controls in X-Plane.

If you’ve got the Logitech G Saitek Pro Flight Yoke System (see number 1 above), it actually mounts onto it for a more realistic, integrated flightdeck experience.

Controls include full Autopilot panel with associated setting controls and integrated dial adjust settings to select your required altitude. Other functions are adjustment of your aircraft’s throttle, flaps, and elevator trim.

The Pro Flight Multi Panel brings much greater realism by giving you physical switches for trim wheel and flaps as well as the ability to setup autopilot commands.

Note that you need drivers for the Logitech flight panel to work on a Mac which are available here. The Logitech G Pro Flight Rudder Pedals are the icing on the cake when it comes to creating a realistic cockpit flight sim setup for your Mac.

The pedals allow you to control the rudder and toe brakes of an aircraft with your feet. The Pro Flight Rudder Pedals are non-slip and have a realistic smooth action that are self-centering.

The pedals provide braking control and allow tension adjustment so that you can find the resistance that suits your flying style.

It comes with a 1.8 meter cable which both provides power and charges the pedals. give you plenty of If you buy the entire setup, then one problem you face is where to put everything. It can become a pain having to mount everything on a desk and take it down again when you’re not using the controls. The Saitek Wheel Stand Pro provides allows you to add the finishing touch by providing a frame to place all your cockpit controls.

All connectors are quick release for easy attachment and the stand is very stable. You can adjust the stand and dismantle it easy if you want to carry it somewhere.

Note that there is nowhere to mount a monitor or iMac included in the stand. It’s only designed for the Saitek flight sim controls.

The assembly instructions also aren’t particularly detailed or clear although it’s not too complicated to work out for yourself.

If you’ve invested several hundred dollars in your flight controllers already, the stand is definitely worth the investment. 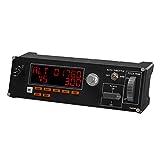 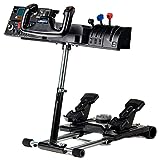 Flight Simulator Controls For Mac: Before You Buy

You should be aware of a few things to avoid disappointment before buying any of these cockpit controls.

We strongly recommend getting a powered USB hub especially if you’re planning to use more than one of these controls together. The reason is that they draw a lot of power from your Mac’s USB hubs which can crash your system or result in the dreaded spinning beach ball of death for ages. A USB hub plugs into your mains supply and takes the power load off of your Mac. It also provides you with plenty more USB ports for your Mac to connect and recharge other things like all-one-printers, phones, iPad and external hard drives for Mac. If you choose to buy a product not featured in these reviews, be very careful with Mac compatibility when choosing flight controls. Many flight controls that work on PC do not work at all on Mac. Examples include the Logitech G Saitek Pro Flight Switch Panel which only works on Windows. Some products such as the CH Products Flight Sim Yoke claim they work on Mac but no longer do due to macOS updates to Sierra and High Sierra. With the CH Products for example, Windows users can download software to program the controls but the software is not available for Mac so you can’t enjoy full functionality.

No flight controls can give the same experience as being in a real flight simulator – it’s just not the same for obvious reasons. Some controllers such as the Saitek range have a null zone built into the hardware which you can’t do anything about. This interferes with the small corrections you need to make the control planes in X-Plane and can contribute to an unrealistic feel. Flight controls for computers will also feel a bit lightweight and flimsy if you’ve tried the real thing before or are a professional pilot.

We hope these cockpit controls add more realism to your Mac’s flight sim setup but if you have any questions, problems or issues with them, let us know in the comments below.