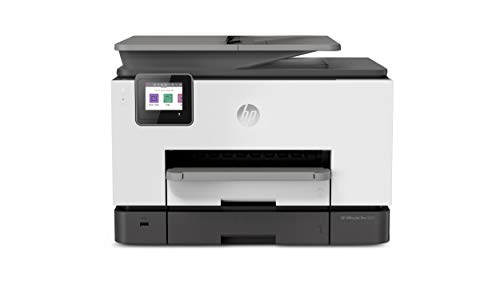 We think its one of the best printers for Mac users especially those that want a fast office level printer without paying laserjet prices.

It’s also the best wireless printer for Mac thanks to its convenient “self-healing” WiFi which automatically reconnects to wireless connections when they drop.

The HP OfficeJet Pro 9025 can print, scan, copy plus fax and replaces the 8720 model. It’s a much sleeker, compact design that’s almost 50% smaller than its predecessor.

Note however that faxing from all-in-one printers isn’t possible in the most recent versions of macOS and we recommend using fax software on a Mac nowadays.

It’s still quite bulky however at around 12 kg as it’s aimed at office use and not a home table top printer like the Canon Pixma.

It’s also not designed for printing photos like the Canon Pixma is and although you can still get decent results with images, it’s far better as a document printer.

The HP OfficeJet Pro supports AirPrint and is extremely fast for an inkjet printer with a speed of 23 ppm (pages per minute) and 20 ppm in color which is actually faster than many laserjet printers such as the HP Laserjet Pro.

As regards running costs, the HP OfficeJet Pro 9025 works out cheapest for businesses if you use HP Instant Ink which automatically orders you new ink cartridges when it detects your ink is running low.

HP claims this can save you up to 70% of ordering cartridges individually although this is based on daily usage of multiple pages per day.

If you’re looking for the perfect mid-office multi purpose printer for your Mac, the HP OfficeJet Pro is a superb machine.

So in this review, we take a closer look at the HP OfficeJet Pro 9025.

The HP OfficeJet Pro 9025 has a useful USB 2.0 port at the front which you can instantly plug in pen-drives and other external storage devices. Although it doesn’t support Near Field Communication (NFC) it does support Apple AirPrint for instant printing via your WiFi network which is the most important thing for Mac, iPad and iPhone users.

One nice touch is that the HP OfficeJet Pro 9025 has “self healing” WiFi. This means that if the printer WiFi connection drops, it will automatically reconnect.

This is often a big problem with wireless printers and a welcome improvement on the previous OfficeJet 8720 model. The HP OfficeJet Pro is extremely fast for an inkjet printer with a speed of 23 ppm (pages per minute) and 20 ppm in color. In draft or greyscale mode you can get up to 39 ppm.

This is incredibly fast for an inkjet and faster than many laserjet printers so you get laserjet speed for inkjet prices.

HP recommends the HP OfficeJet Pro 9025 can manage a volume of 30,000 black pages and 2000 color pages which is suitable for most small to medium sized office environments.

The impressive print speed of the OfficeJet Pro 9025 does come with a downside however – noise.

The OfficeJet Pro 9025 is a pretty noisy printer as it whips through pages and you may want to consider having it located in another room if it’s in an office environment.

The HP OfficeJet Pro 9025 has a single pass duplex scanner which means the ADF can scan both sides of a document very quickly.

There’s a duplex Auto Document Feeder (ADF) that can officially hold up to 35 sheets of paper for scanning although you can easily squeeze a few more in there if you want.

Although all the functions of the HP OfficeJet Pro work on Mac, we found that the “Scan to computer” on the touchscreen did not work well in either Catalina or Big Sur. We found a similar problem when trying to “Scan to network folder” on macOS.

However, we simply used the HP SmartApp to scan instead and it worked fine and it’s not a deal breaker.

The HP OfficeJet Pro comes with a set of color and black cartridges in the box.

Alternatively, you can subscribe to HP Instant Ink which costs around $19.99 for 700 pages per month for both color and black printing.

HP claims this can save you up to 70% of your print cartridge costs depending how much printing you do. 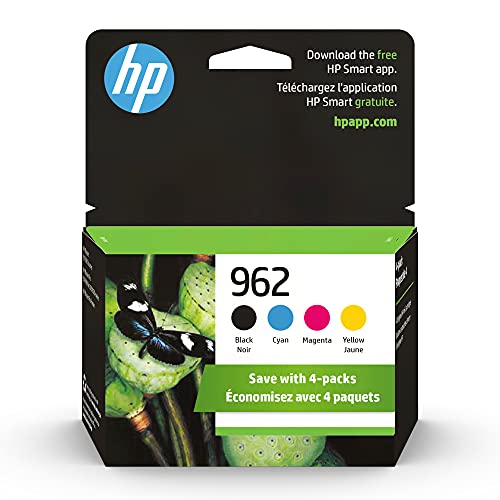 One thing that HP emphasize with the HP OfficeJet Pro models is the Smart Tasks function.

This basically means it can automate print jobs that you often repeat and save the settings. This works via the HP Smart Print mobile app which is easy to use and well designed.

Home users probably won’t find much need for it but those that print in office environments with multiple users will find it a handy way to quickly setup the printer for different print tasks.

The HP OfficeJet Pro 9025 also has a few other unusual features such as firmware recovery in the event of a crash of the machine.

The are also firmware and security integrity scans to prevent unauthorized BIOS access of the printer or interception of documents.

For system administrators, you can also setup a server on the OfficeJet Pro 9025 which allows you to configure firewalls and user access.

There’s no NFC support in the HP OfficeJet Pro 9025 but it does support AirPrint which is the most important thing for Mac users.

The touch screen has also been shrunk compared to the previous model and we found it a bit small to navigate.

The noisiness of the HP OfficeJet Pro 9025 is also a bit annoying. HP has managed to make it much more compact that previous models but they payoff is that printer rattles and whirs a lot more than previous models.

HP have also been very slow to update drivers for Monterey 12.2.1 although there is a workaround for this.