Neither Paint or Paint 3D for Mac exist as Microsoft never released it on macOS but there are some excellent alternatives n 2018.

If you’ve switched from PC to Mac, it might seem strange that there’s no default drawing program with macOS. When Macs were first released in 1984, they actually included MacPaint which came before Microsoft launched MS Paint shortly after in 1985.

However, Apple quietly dropped MacPaint from later versions of OS X and macOS, leaving Mac users with no equivalent version of Paint on Mac anymore.

The good news is that there are now some excellent Paint replacements for Mac that are either free or very cheap.

Here then are the top 5 alternatives to MS Paint and Paint 3D on Mac in order of ranking.

Patina is a bitmap editor and drawing tool built specifically for Mac users. Patina is an elegant equivalent to Microsoft Paint on Mac which is aimed at those that want something stylish, powerful but simple like MS Paint.

For the very modest fee of $2.99, you basically get a better version of MS Paint but with all the same features and more besides.

Patina is extremely easy to use and has a more macOS style interface than most other Microsoft Paint alternatives on Mac that we’ve tried.

What we really like about Patina compared to other Paint apps on Mac is that it keeps things very simple and easy.

There are no layers or tools to edit specific objects – in fact there are very few toolbars or pallets at all – it’s all about paintbrushes, colors and drawing.

The brush strokes on the canvas in particular are fast, smooth and feel very realistic. Patina is ideal for sketching ideas, drawing diagrams, illustrating a concept or just doodling.

You can save images with a transparent background and simply drag and drop images onto the canvas for editing.

Importantly for Mac users, unlike many Paint equivalents on Mac, Patina is regularly updated to be compatible with the latest versions of macOS including El Capitan, Sierra and High Sierra.

This in itself is worth paying a few dollars for because although most similar Paint apps for Mac are either free or open source meaning the developer doesn’t often update them when there’s a new release of OS X and they end up not working anymore.

This is what happened to Paintbrush (see review below) which used to be the best alternative to Microsoft Paint on Mac but now doesn’t work properly with OS X 10.11 El Capitan or macOS 10.12 Sierra or 10.13 High Sierra.

Patina works with all versions of OS X from 10.8 Mountain Lion and above and we’ve had no problems with it in the latest versions of macOS.

To learn more about exactly what Patina can and can’t do, check out the Patina FAQs. 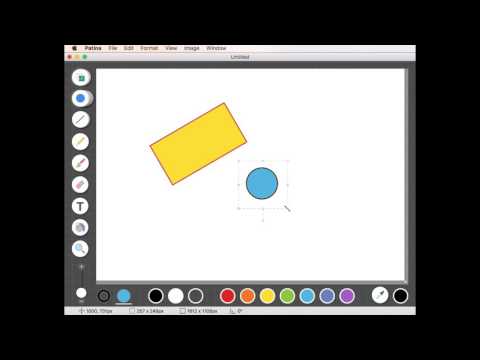 Paintbrush for Mac used to be the best alternative to Paint for Mac and is completely free. However, after the release of OS X El Capitan, it is no longer stable and so it’s only a good option if you’re working on OS X 10.10 Yosemite or lower.

As soon as you open Paintbrush, you’ll notice that it features a very similar interface to the classic version of MS Paint with the same kind of color palette and paintbrush tools.

You can open and save most image formats in Paintbrush including BMP, PNG, JPEG, TIFF, and GIF images.

You can import transparent images although only those that support an alpha channel in PNGs and GIF format. You can also cut and paste images from other applications such as Microsoft Office, Adobe Creative Suite and OS X Preview.

The latest version of Paintbrush for Mac also supports marching ants for the selection tool i.e. the ability to select an object and distinguish it from the background with a dotted-line border.

Other useful tools included in Paintbrush include Airbrush, Rounded Rectangle, Eyedropper, and Zoom. You can also of course resize images or the canvas and zoom into images to edit individual pixels like on Microsoft Paint.

The biggest problem however with Paintbrush is that it isn’t updated very often. The last update was in 2015 and we’ve noticed it doesn’t work well with El Capitan or above.

If you need a basic, streamlined image editor for Mac that can satisfy your need to doodle, entertain the kids, quickly crop a photo or image or add some text to an image, Paintbrush is still a very good equivalent to MS Paint. 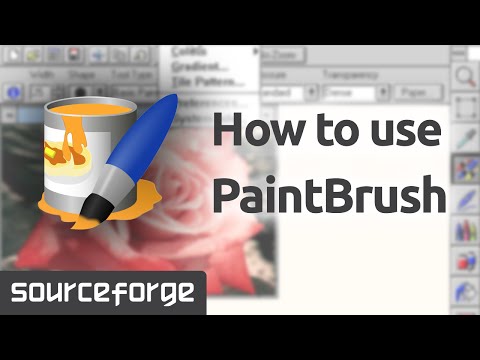 Paint S (formerly known as Paint 2) is a free, easy-to-use drawing tool. However, it’s important to note that although Paint S is free, you’ll have to upgrade to Paint Pro in order to get anything like the tools and features that are in Microsoft Paint.

Paint S allows you to draw simple pictures or edit your existing photos. Paint S can open and save images in TIFF, JPEG, PNG and BMP and features all the standard tools you get in Microsoft Paint such as sketch, crop, rotate and scale images.

Alpha transparency is supported as is adding shadows, gradients and reflections. You can add a grid and rulers to sketches and cut and paste from other apps including Microsoft Office, Safari, Pages etc.

Paint Pro unlocks all features, including Layers which allow you to superimpose several different types of image or annotations.

Overall, Paint S is too limited to be at the same level as MS Paint but Paint Pro is pretty good and is one of the few Paint style apps on Mac that also handles layers.

The great thing about Preview is that it is included in macOS so there’s no need to download anything. What many Mac users don’t realize is that it also has a basic drawing tool which is similar to MS Paint.

Open an image in Preview bu going to “File” and then “Open”. We advise making a copy or duplicate of your image first before editing as Preview doesn’t add layers – it edits the image directly and any edits can’t be undone after Saving.

The range of tools available in Preview is pretty good including a rectangular, elliptical, lasso and smart lasso selector that allow you to cut out objects or items in images.

The smart lasso for example can automatically detect borders in images as you guide it around thus allowing you to isolate or edit specific objects.

One other neat feature is the ability to add your signature to a document or image using your Trackpad or via your Mac’s iSight camera.

If you draw shapes but haven’t got a steady hand, Preview will even adjust standard shapes such as ovals to make them rounder and more accurate.

OS X Preview is a really useful tool for all sorts of basic image editing, adjusting and of course, drawing and painting.

It doesn’t do much beyond that however but if you want a very basic drawing app without downloading anything, it does the job.

Finally, if you want something really fancy, check out Pixelmator. Pixelmator is like a deluxe version of MS Paint and is aimed at those that want a powerful image editing and drawing tool but it can also be easily used like MS Paint for doodling and simple drawings.

Pixelmator is made specifically for Mac users and utilizes all the latest technologies and capabilities of OS X to produce fast, professional and powerful image editing and drawing tools.

It’s already been updated to take advantage of the new Touch Bars in the latest MacBook Pro allowing you to edit images without even touching your Trackpad.

If you need Vector tools and Layers, it’s all there and more in Pixelmator for Mac.

Pixelmator also supports the widest range of formats in any Paint like program on Mac you’ll find including  SD, TIFF, JPEG, PNG and PDF.

If you just want to doodle or draw, there’s a toolbox packed with tools that feel ultra realistic when making brush strokes or drawing lines. You can even change the hardness of brushes and blending modes.

There are also 160 special effects to have fun with and breathe new life into images and photos.

Finally, you can also share images instantly to social networks and email or export them to OS X Photos, Photoshop or iCloud if you want to show-off your creations instantly.

Although $30 is a lot for an alternative to MS Paint on Mac, it’s actually very good value for money in terms of what you get in one design tool. Pixelmator is so good in fact that it was voted Mac App of the Year by Apple in 2011.

Many of the things you can do in Adobe Photoshop for example, you can do in Pixelmator for a fraction of the cost and there’s no monthly subscription like with Adobe Creative Cloud products.

Since it’s focused only on Mac too, Pixelmator is also frequently and quickly updated to be compatible with the latest versions of OS X including OS X 10.12 Sierra.

If you want something for more than just doodling, and especially if you want a powerful image editor without paying big bucks, Pixelmator is the best image editing and drawing application for Mac for the money.

How To Run Paint 3D On Mac

Microsoft Paint is no longer just the simple doodling app of old.

In this respect, only Pixelmator comes close as a replacement for the latest version of Microsoft Paint on Mac although most users probably aren’t looking for something as advanced as 3D and 2D drawings.

The good news is that Paint 3D is free in Windows 10 and if none of these Paint alternatives will do, you can also run it on your Mac for free.

Nowadays you can run Windows 10 on Mac for free because Microsoft no longer require users to activate it with a Product Key in order to keep using it.

Paint 3D is included free with Windows 10 meaning you can use it for free on your Mac and doodle to your heart’s content.

To start using Paint 3D on Mac in just a matter of minutes, just follow these instructions how to install Windows 10 on Mac for free.

We hope we’ve shown you that you can easily live without Microsoft Paint and Paint 3D on Mac and even get something much better in the case of Pixelmator.

Paintbrush used to be the go-to Paint utility for Mac users looking for a Paint alternative although since it no longer works on the latest versions of macOS, it’s no longer an option for many Mac users and you’re much better off going for Patina.

If you just want something really basic and free, Paint 2 is worth checking out although you really need to upgrade to Paint Pro to make it a genuine alternative to MS Paint.

Finally, Preview in macOS is often overlooked when it comes to drawing and image editing and you might find that the alternative to Microsoft Paint on Mac you’ve been looking for, is already under your nose.

If you have any comments, experiences or suggestions about the apps featured here or Mac paint or drawing apps, let us know in the comments below.