Search
If you're looking for an eGPU with rock solid Mac compatibility and unparalleled portability, the Sonnet Puck is an outstanding eGPU for Mac users on the move.
Pros:
Reliable compatiblity with Macs
Sonnet Puck is portable
Very easy to setup and use
Cons:
Sonnet Puck power pack is heavy
Sonnet Puck only offers 4GB graphics card
Sonnet Puck graphics card can't be changed or upgraded
90

The Sonnet eGFX Breakaway Puck is one of our top rated eGPUs for Mac.

If you’re looking for an external graphics card (eGFX) that can seriously boost the graphics capabilities of your Mac, be used out of the box but can be carried anywhere in a rucksack, it’s a superb piece of kit.

From 3D graphic design and rendering and using a VR helmet with your Mac to using AI apps and CPU intensive 4K video editing, the Sonnet Breakaway Puck opens up a whole new world of graphics capabilities on your Mac especially those that only have limited integrated graphics cards.

In this review we take a closer look at it.

Important Note: Sonnet eGPU boxes do not officially work with Boot Camp and if you want to play Windows only games we recommend using one of these ways to run Windows on a Mac.

However, some users have found that it is possible to play some Windows games on a Mac using Boot Camp and the Sonnet boxes so it can be done although is often not reliable.

It’s also important to note that it’s not worth using a Thunderbolt 2 to 3 adapter to try and connect the Sonnet Puck to an older Mac. It doesn’t work so you must have a Mac with a Thunderbolt 3 port to use it.

One of the things we like most about Sonnet is that the company was the first to cater for Mac users when all other eGPU manufacturers were still focusing on the PC market.

In fact Sonnet Breakaway Boxes were the first to be endorsed by Apple and marketed to Apple developers to help encourage the development of VR and AI apps on macOS. Another thing we really like about Sonnet eGPUs is that it’s one of the only manufacturers to offer both desktop and portable eGPUs.

The Sonnet eGFX Breakaway Box is the desktop version and although it can handle more powerful graphics cards, it weighs in at a hefty 11.46lbs.

The Sonnet Puck is the portable version of the Breakaway Box weighing just 5.25lbs.

That makes it ideal for using with Mac Minis, MacBooks and generally carrying around with you everywhere in a rucksack or briefcase. The reason it’s so lightweight is because the power pack is external and it should be noted that it’s quite chunky weighing at least a few lbs.

You can see how big the Sonnet Puck power supply is compared to the actual Puck itself below. And this is how much bigger the desktop version of the Sonnet Breakaway Box with integrated power supply below. The Puck also comes with its own graphics card which means there’s no messing around trying to fit a graphics card. There’s also a cooling fan within the unit although the eGPU runs remarkably cool and you won’t hear this much.

Sonnet offer Breakaway boxes with or without graphics cards but the Puck includes an integrated Radeon 470. There used to be a slightly slower Radeon 460 version but that has now been discontinued by Sonnet.

Since the card is already integrated, it’s just a simple case of plugging-in the power supply and connecting the Thunderbolt 3 cable to your Mac.

You can place the puck easily on your desk or attach it to a mounting bracket ($59) on the back of your monitor. Alternatively, you can also place it on top of a Mac Mini.

The first thing you’ll notice when using The Puck is that it makes a massive difference to frame rates when gaming. You should be able to achieve anything up to at least 60-70 frames per second which is around 3 times faster than your Mac’s integrated graphics card.

Sonnet has provided some interesting frame rate stats regarding the performance of the Sonnet Puck showing how many FPS (frames per second) can be achieved with the Puck using different settings.

It should be noted that these were tested on Windows although similar results will apply for games on Mac.

One other thing we noticed is that your Mac will also run quieter as the Sonnet Puck takes the load off it by processing the heavy duty graphics work.

The Puck itself runs very quiet but once you’ve been using it a while, it does get very hot.

The Sonnet Puck only provides 4GB of video memory which isn’t as much as the desktop version of the Sonnet and is on the very low end of most eGPU boxes.

There’s only one Thunderbolt port too although there are 4 external monitor ports including one HDMi and three DisplayPort interfaces.

The multitude of monitor ports is because the Sonnet Puck is clearly geared towards eSport gamers and it would have been nice to have had at least one extra Thunderbolt port instead.

One other thing to bear in mind is that you can’t change the Radeon graphics card inside the Puck – you’ll have to buy a whole new eGPU if you need more power.

The Sonnet Puck is actually more expensive than the more powerful full sized Sonnet Breakaway Box but of course you get the graphic card included. And the convenience of portability.

If you’re looking for an eGPU with rock solid Mac compatibility and unparalleled portability, the Sonnet Puck is an outstanding eGPU for Mac users on the move.

You can check pricing and availability for the Sonnet Puck here but expect to pay in the region of $500. 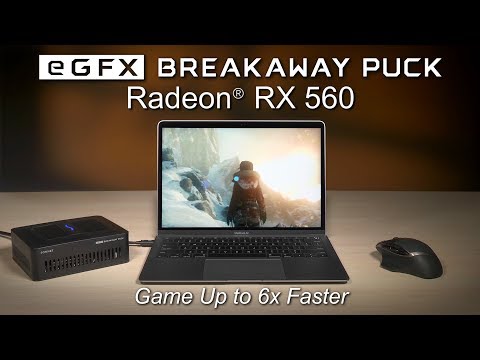