Search
The Sonnet eGFX Breakaway Box is a superb eGPU for Mac users. If you're looking for something with rock solid Mac support, a wide range of card support and reliable performance, you won't be disappointed.
Pros:
The first eGPU to officially support Macs
Support a wide range of cards
Powerful but silent
Cons:
Short Thunderbolt cable
It's a big unit to have on your desk
Doesn't support running Windows through Boot Camp
Not compaitble with Apple Silicon M1 or M2 Macs
90
Buy Now

We rated the excellent Sonnet eGFX Breakaway Box as the best eGPU for Mac.

An eGPU allows you to play graphics intensive games such at maximum frame rates just as if you were playing it on a PC – even on older Macs.

They also allow your Mac to handle highly demanding applications such as graphic design software or powerful CAD applications with ease.

That’s not to mention an eGPU can open up the possibilities of enjoying VR games or AI applications on your Mac (although unfortunately there aren’t many available yet).

The Sonnet eGFX Breakaway Box is the more powerful desktop version of the Sonnet Puck which is Sonnet’s portable eGPU that can be carried in a rucksack.

The Sonnet eGFX Breakaway Box was the first eGPU to officially support Macs and was endorsed by Apple for developers to use to develop VR apps and games on macOS.

In this review we take a closer look at it.

Important Note: Sonnet boxes do not officially work with Boot Camp and if you want to play Windows only games we recommend using Parallels to run Windows on a Mac.

However, some users have found that it is possible to play some Windows games on a Mac using Boot Camp and Sonnet eGPUs therefore it is possible but may not be very reliable.

Many people when deciding whether to buy a Sonnet eGPU will be wondering whether to go for the portable Sonnet Puck version or the desktop Breakaway Box.

If you’re planning on moving around a lot with your eGPU such as going to friends homes to play games or using it at home and in the office, then it makes total sense to go for the Sonnet Puck. However, if you’re planning on using your eGPU only at home or only in the office, then you’ll get more bang for your buck with the Breakaway Box than the Sonnet Puck.

This is because the Sonnet Breakaway Box can supply more power and support faster graphics cards than the Puck.

The big difference between the Sonnet Puck and the Sonnet Breakaway Box is that the Puck includes a Radeon 570 graphics card inside so you literally just have to plug it in and play.

The other big difference is that with the Sonnet Breakaway Box, you also need to buy a graphics card such as the highly rated Sapphire Radeon Pulse RX Vega and install it yourself.

Some of the highlights of the Sonnet eGFX Breakaway Box are:

Depending on the graphics card you use, you may have to install drivers from the manufacturers website too.

We recommend using Radeon AMD cards with Macs (such as the AMD Radeon RX 580) as they’re fully supported on macOS.

Note that NVIDIA cards are not supported on macOS yet as NVIDIA has not released drivers for macOS. This is possibly because NVIDIA is trying to promote its own gaming service GeForce Now For Mac rather than encourage Mac users to use eGPUs. One thing we like about Sonnet eGPUs is that the fans are controlled by sensors. That way, they only activate when the eGPU is operating at high temperatures.

Many other boxes – such as the Akitio Node – have the fans on constantly which can be quite noisy. The Sonnet Breakaway box operates very quietly although after hours of use, it does get a bit hot but that’s completely normal.

The frame rates that you can achieve with the Sonnet eGFX Breakaway Box are outstanding. If you’re playing games from the Steam store, you should be getting frame rates of 60FPS or more even with graphics settings set to maximum on a 4K monitor.

Unfortunately, you won’t be able to use it with SteamVR though due to Valve’s decision to drop VR support for Mac.

However, it’s important to note that although the experience is very close to playing on Windows, you’ll still get better frame rates using a PC although not enough to make a huge difference.

There’s little to fault with the Sonnet eGFX Breakaway Box although the Thunderbolt 3 cable is way too small at just 0.5m to position it far from your Mac.

It’s also a pretty hefty unit to have on your desk and to position it on the floor or at feet level, you’ll probably need to buy a longer Thunderbolt 3 cable.

Unlike the Sonnet Puck, there are 2 versions of the Sonnet eGFX Breakaway Box – the 550W and 650W version. There used to be a 350W version but that is no longer available from Sonnet.

The difference between them is the power they can provide.

The more powerful the model, the bigger and more powerful graphics card they can support and the more charging power they provide your MacBook.

We recommend going for the most powerful 650W version as it supports 375W graphics cards that also require up to an additional 100W of peak power (8-pin + 8-pin power connectors).

It also provides up to 87W of power delivery to charge a laptop.

Apple also sells the Sonnet eGFX Breakaway Box as part of its External Graphics Development Kit for $599 for those that want to develop VR apps and games on Mac.

The kit is only available to members of the Apple Development Program however and includes the Sonnet eGFX Breakway Box, AMD Radeon RX 580 8GB graphics card and Belkin USB-C to 4-port USB-A hub.

This is actually a very good deal because although you can buy the Sonnet eGPU cheaper on it’s own, the Radeon RX 580 graphics card will set you back several hundred dollars plus you’ll need to purchase the Belkin Thunderbolt Hub.

However, if you’ve already got a graphics card, it’s cheaper to buy the Sonnet eGFX and Thunderbolt Hub.

If you’re not part of the Apple Developer Program though, you can’t take advantage of the Apple deal anyway and have to purchase everything separately.

You can watch an interesting setup of a Sonnet Breakaway being used with an HTC Vive Headset to play VR games on a Mac here.

You can also watch here how the Sonnet Breakaway eGPU makes some impressive improvements to 4K video editing on Mac. 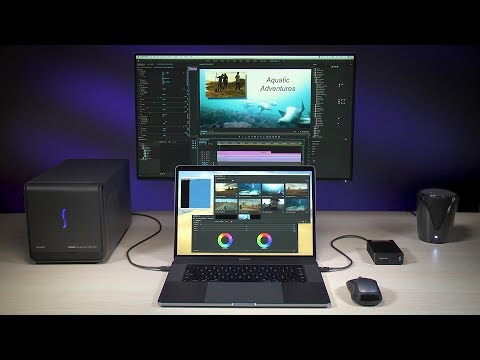