Although there’s no such thing as an Apple drawing tablet, the Apple iPad is the closest thing to a drawing tablet made by Apple.

Here we take a closer look at how the Apple iPad compares to drawing tablets and the pros and cons of using it as a drawing pad.

Can You Use An iPad As A Drawing Tablet?

Of course though, the iPad is not strictly a drawing tablet.

The iPad has always been a tablet first and foremost but the introduction of the Apple Pencil has turned it into a serious drawing tool for amateur and professional digital artists.

So on the face of it, you’re getting much more for your money with an iPad.

However, the reason drawing tablets are still so popular is because they provide the most realistic drawing experience possible.

Drawing tablets aim to recreate the accuracy and feeling of putting pen or brush to paper in a way that iPads do not.

The iPad has come a long way though and nowadays, many professional artists use the iPad as their drawing tablet of choice.

Here are some of the advantages of iPads compared to drawing tablets. Procreate is an amazing free drawing app for iPads. The Apple Pencil 2 charges magnetically on the iPad. Pinch to zoom and rotate on the iPad is a great feature for artists.

However, there are some disadvantages to using an iPad as a drawing tablet.

Which Is The Best iPad For Drawing?

Both the standard iPad and iPad Pro can be used for drawing.

However, by far the best iPad for drawing in the 2022 iPad Pro with the latest M2 chip.

This is the best iPad for drawing in 2022 as it’s the latest model released by Apple and includes the latest Apple Silicon M2 chip inside.

All Apple products will eventually be based on the Apple Silicon chip and it’s possible that eventually iPads will have the same M1 Pro and M1 Max chips that are already being used in Macs.

We therefore strongly recommend getting the newest generation of iPad Pro over the older generation such as the 2020 iPad Pro with the older A12 chip.

The iPad Pro also has a much bigger 12.9 inch screen compared to the standard iPad which is far more comfortable for spending hours drawing and sketching. 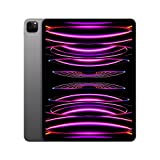 Conclusion: Should You Get An iPad For Drawing?

In summary, we think the Apple iPad is a superb drawing tablet.

If we had to summarize the biggest advantage of an iPad over traditional drawing tablets, it’s convenience.

You can start sketching so much quicker on an iPad compared to a drawing tablet not to mention the huge range of both graphic design and other apps available for it.

The added advantage of a touch screen and all that enables also makes it a very versatile drawing tool.

How to Draw in Procreate for Beginner iPad Pro